Rosaria has been one of the much-awaited characters to join Genshin Impact’s roster. The spear-wielding nun has been leaked a few patches ago. She also made her first appearance during Dragonspine’s release on Patch 1.2. Now that we actually get to play her, questions about building her arise. But fear not, this guide is here to help you!

Rosaria’s Role in the Party

Rosaria does a lot in terms of damage and pumping up the crit rates of the team. Because of that, there are two roles Rosaria can take in a party: Sub DPS and Main DPS.

Rosaria’s talents make her a powerhouse in the Physical DPS department while being able to constantly apply Cryo status with her Elemental Burst.

Let’s talk about Rosaria’s Elemental Skill for a bit. Some interesting wording in the description has come to my attention. It says: “Rosaria cannot use this travel behind opponents of a larger build.” It’s kind of a weird skill description as we’ve seen Rosaria travel behind a Cryogunner Legionnaire that is much larger than Rosaria. This asks the question of what’s considered a “larger build”? Rosaria can’t teleport behind boss monsters, but the Cryogunner Legionnaire is still much bigger than her and she was able to teleport behind him. Someone will probably test it out on all the monsters to see which ones Rosaria can teleport to and which ones she can’t. It’s something worth looking into if you’re interested in playing with Rosaria. Let’s move on to which talents we recommend you ascend first for a great Rosaria build:

Rosaria’s Elemental Burst deals a lot of damage and can also be used to trigger a lot of Cryo effects. The last two, Elemental Skill and Normal Attack, are interchangeable, however, I recommend going for Elemental Skill as a second talent because it charges your Elemental Burst (and it looks cool teleporting around). For a physical DPS build for Rosaria, we suggest you ascend these talents:

Again, the last two are interchangeable. The two builds are viable, just pick whichever you like. 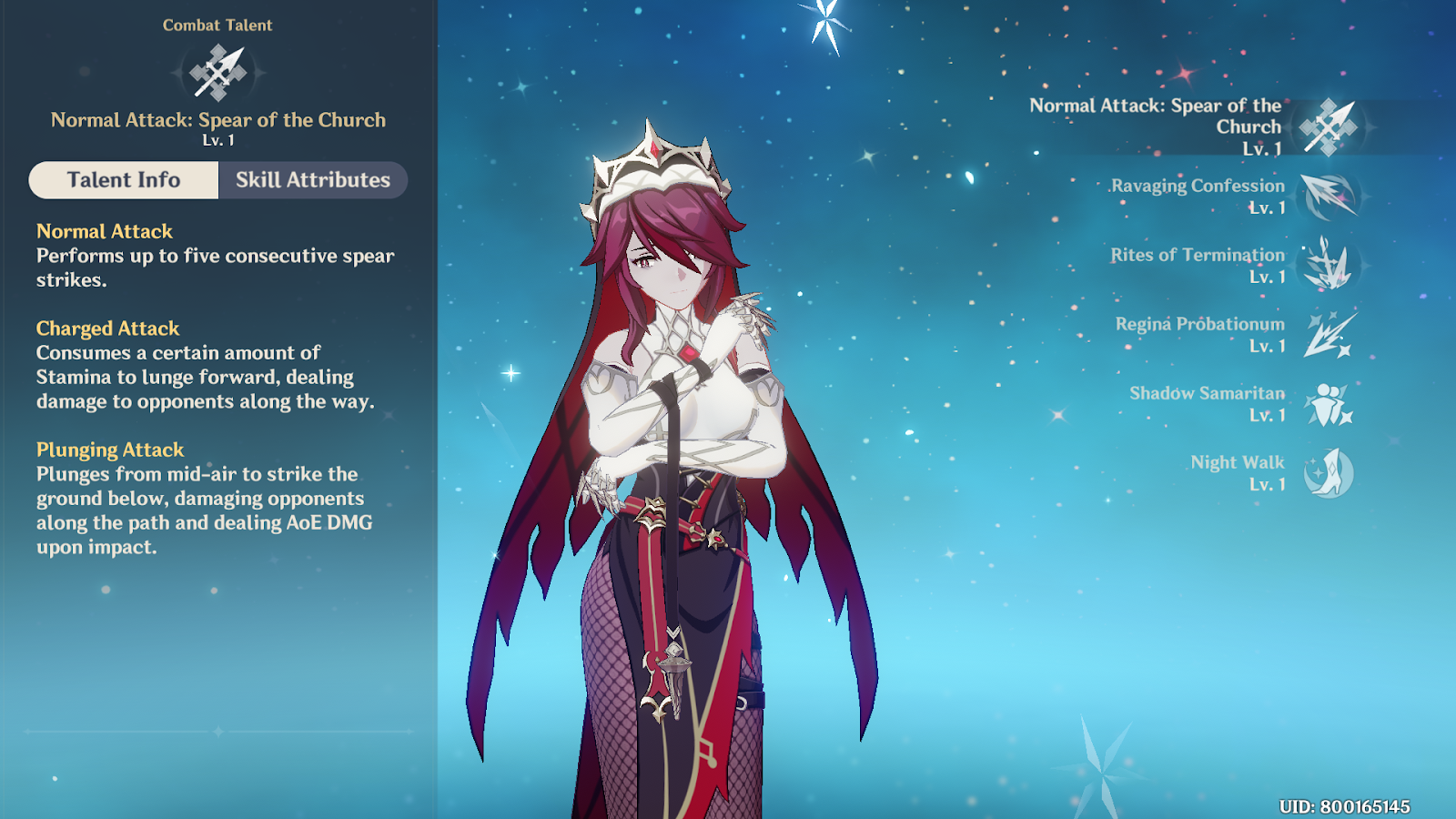 Since Rosaria is a 4-star character, it’s much easier for her to get to C6 than a 5-star character. But that doesn’t mean you should automatically go for it as Rosaria is already viable without constellations.

Unlocking Rosaria’s C1 is already enough for people who want to go for Physical DPS. Her C2 and C6 — maybe C4 as well — are the cherries on top. For Sub DPS, we recommend going for C2, at least. 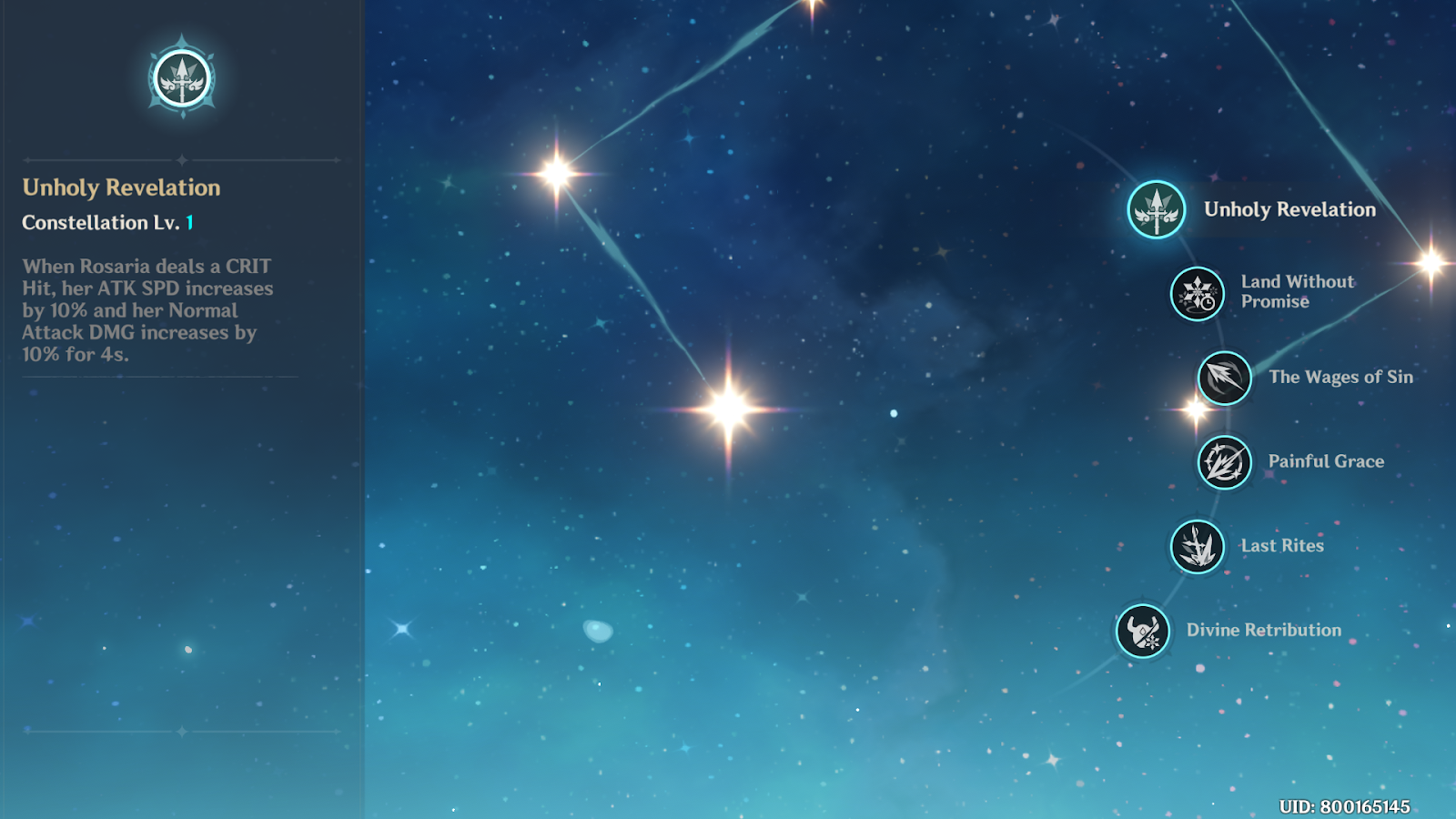 Rosaria can benefit from a lot of the polearms currently in the game. Here are some of the better weapons to choose from:

The most common one to use would probably be Dragonspine Spear as this would deal a lot of burst damage. However, we also recommend the Blackcliff Pole for the stacking attack bonus after defeating an opponent. Another recommendation would be the Crescent Pike as you’d be picking up quite a bit of Elemental Orbs while you have her Elemental Burst down. Favonius Lance would only be used by a Sub DPS build Rosaria who’d want to always have her Elemental Burst down whenever ready. A melt comp surrounding this build would really be good. Generally, you’d want a weapon with high damage as crit rate is already covered by ascension and her passive talents. You’d want to take advantage of that crit rate by pumping up crit damage and attack. 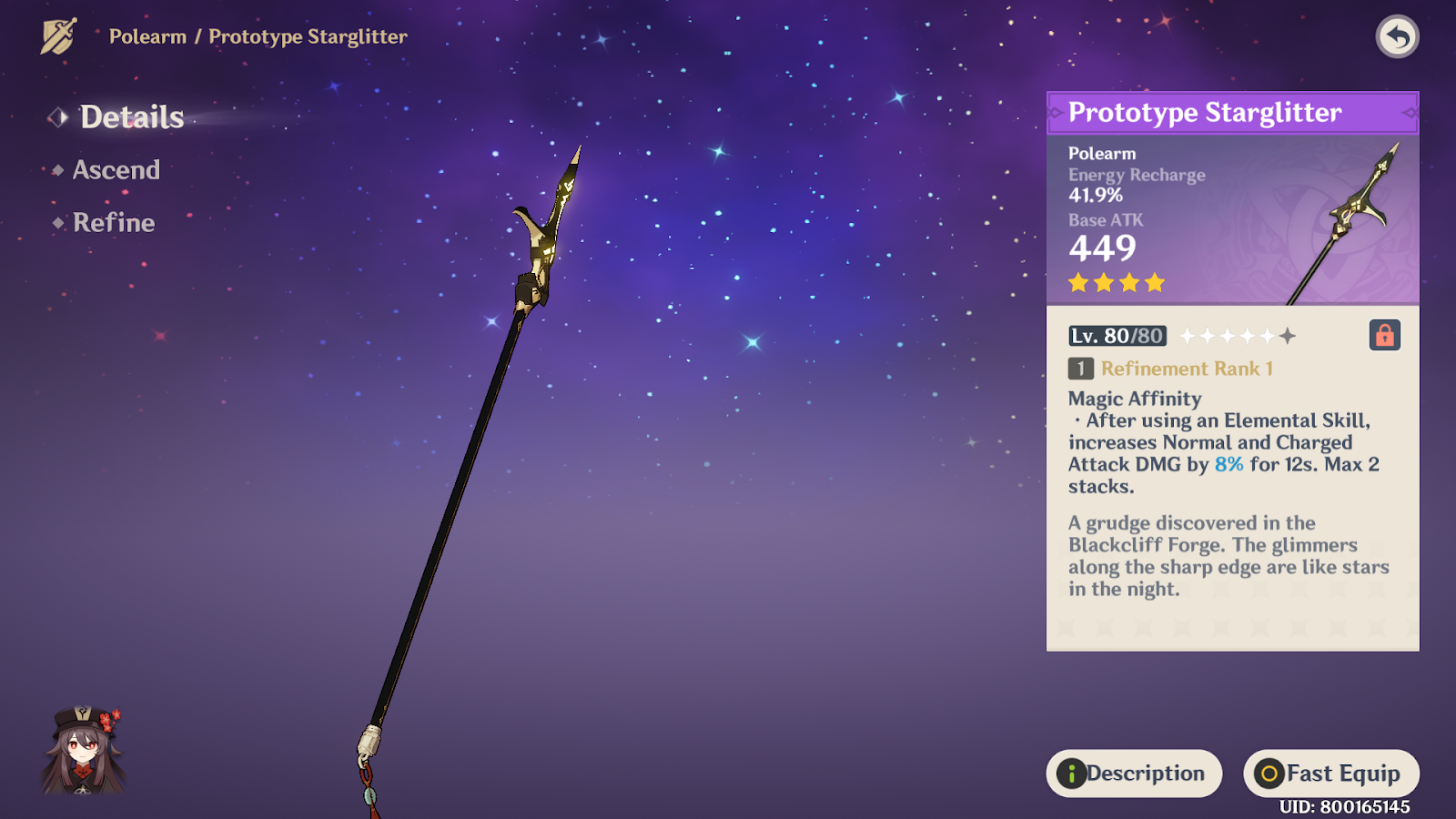 Just like her weapons, the best artifacts to use with Rosaria will depend on your build, but here are some suggestions:

The go-to artifact set for Rosaria is the Blizzard Strayer. With that set, crit rate is already increased by 20% giving you more options for artifact options and weapons so you don’t reach over the crit rate threshold. Bloodstained Chivalry and Gladiator’s Finale are for Physical DPS builds. You’d want to go for 2 Bloodstained and 2 Chivalry for that. Noblesse Oblige and Blizzard Strayer are for Sub-DPS builds. You’d also go 2 Noblesse and 2 Blizzard for that build. For artifact main stats, you’d want to go for ATK and CRIT DMG. Same for the sub stats as a low attack will not help your crit damage at all. 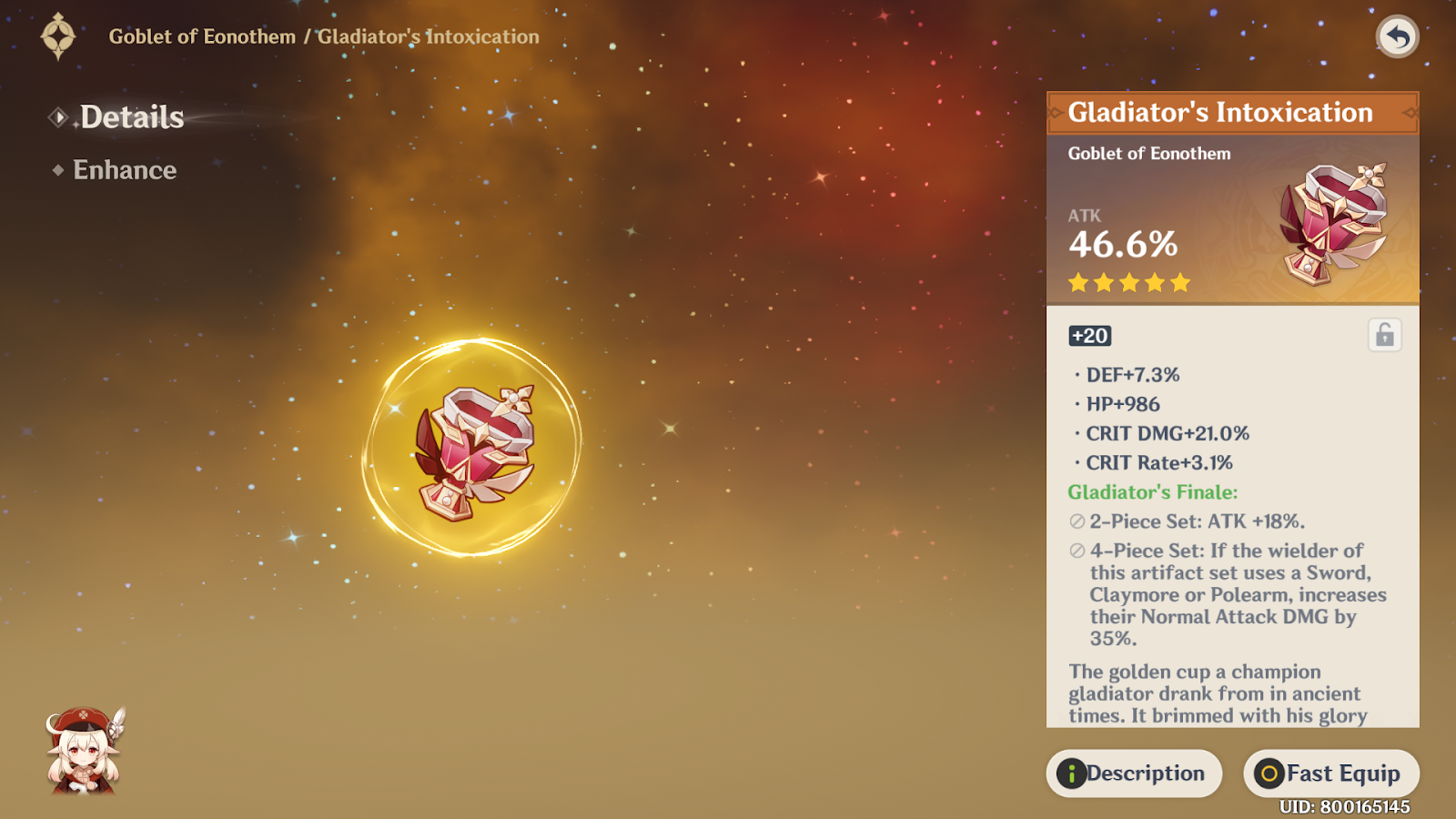 Rosaria is a really fun character to play. She plays a little bit like Chongyun but as a spear user. She’s a really strong character that can deal damage and provide utility to your team. Try pairing her with Fischl or Xingqiu and you’ll have a fun time! [poilib element=”accentDivider”]   Cedric Pabriga is a freelance writer for IGN. He spends most of his day listening to music or playing video games. He also writes short stories in his spare time. You can follow him on Twitter @IchikaRika.