Eula, affectionately dubbed as End-User License Agreement, has recently joined Genshin Impact’s roster. With great burst damage and faster attack speed than all the other claymore users, she’s already proving herself as a great DPS character. That said, there are ways to make her an even better asset to your party. Keep reading for guidance on Eula’s best talents, constellations, weapons, artifacts, and more. [ignvideo url=”https://www.ign.com/videos/2021/05/17/genshin-impact-new-character-demo-eula-flickering-candlelight-trailer”]

Eula’s Role in the Party

Eula is a physical and burst DPS character who is suitable to take the role of main DPS of the party. Her attacks deliver devastating numbers and she can easily wipe out groups of enemies with her elemental burst. She can be quite the selfish carry, just like Diluc and Klee. Since she deals cryo damage, we recommend having an electro sub DPS or support character to help trigger Superconduct, an elemental reaction that lowers a monster’s physical resistance.

What Are Eula’s Talents?

The priority for Eula’s talents would be: 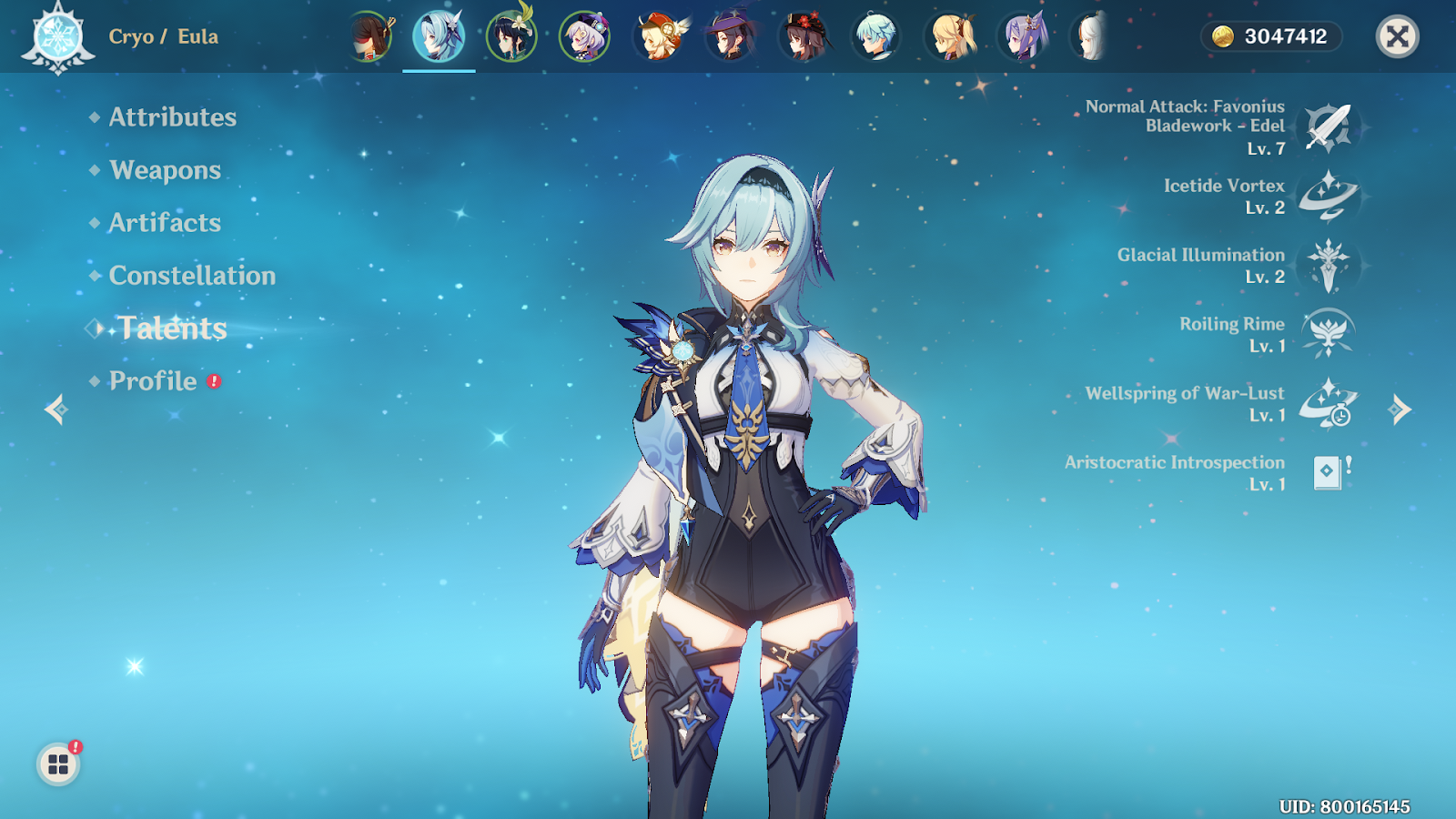 What Are Eula’s Constellations?

C4 – The Obstinacy of One’s Inferiors:

All of Eula’s constellations provide her a significant power boost but C1, C2, and C6 are the most impactful. This isn’t to say that Eula is bad without constellations. On the contrary, she’s still pretty strong without them. 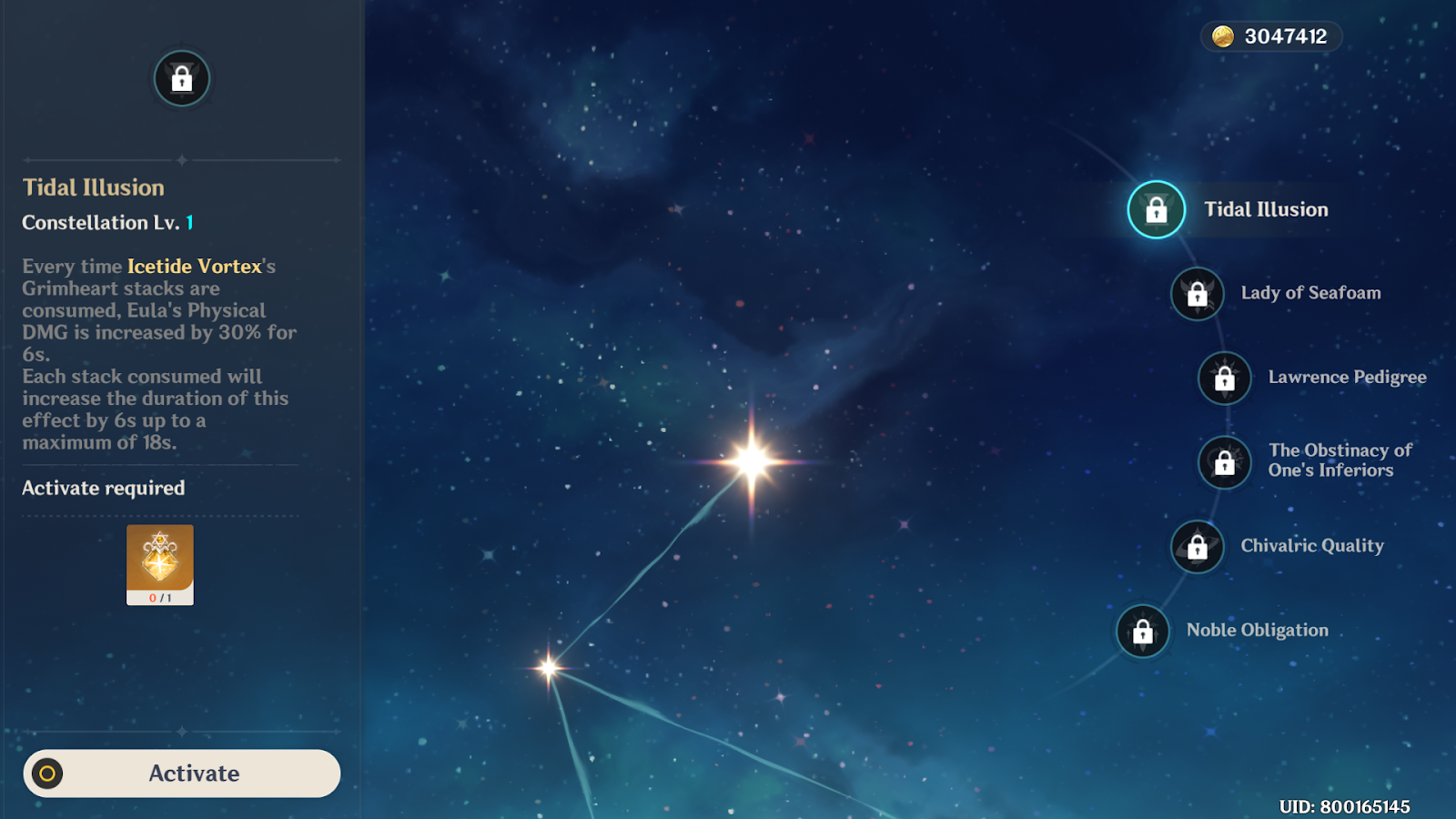 The Best Build For Eula

We already established Eula makes a great main DPS character and would benefit from being supported by an electro sub DPS or support character. As for the best weapons for Eula, we recommend Wolf’s Gravestone or Song of Broken Pines. Both come close in terms of performance, but if we had to choose one, Song of Broken Pines is ultimately the better of the two. The reason being the difference in passives and when you can activate them. With Wolf’s Gravestone, you need to hit an enemy with 30% or less HP for its passive to trigger whereas, with Song of Broken Pines, you can start to activate its passive the moment you start attacking. This makes Song of Broken Pines better for longer fights. However, if you’re fighting a lot of smaller monsters, Wolf’s Gravestone is a much better pick. Don’t worry if you don’t have either, there’s Serpent Spine from the Battle Pass which is a nice substitute for the other two. Just make sure to minimize the times you get hit when using Serpent Spine. If you’re free-to-play (F2P), Snow-Tombed Starsilver is the best weapon for you. It has a 10-second cooldown for its passive and a chance to hit for 200% attack damage when the enemy is affected by cryo. With Eula being a character that deals cryo damage, this makes it easier to activate the last part of the Snow-Tombed’s passive. Snow-Tombed Starsilver also has a shorter cooldown than Prototype Archaic’s passive which allows Eula to deal more damage in a shorter amount of time. As for the best artifact we recommend, Pale Flame takes the top spot as it seems like it’s specifically made for her. Its 4-piece effect works perfectly with Eula’s elemental skill as it only has a few seconds of cooldown, meaning it can be used back to back for maximum damage. With C2, this becomes much easier as the hold cooldown of her elemental skill will match her tap cooldown, which means it’s going to be reduced from a to a 4-second cooldown. If you don’t have C2 Eula, the best way to maximize damage would be to only use the hold part of her elemental skill when her elemental burst is up as using her elemental burst, in conjunction with Wellspring of War-Lust Stat, resets her elemental skill’s cooldown. The stat priorities for artifacts are attack %, physical damage %, critical rate, and critical damage. Best Weapons: 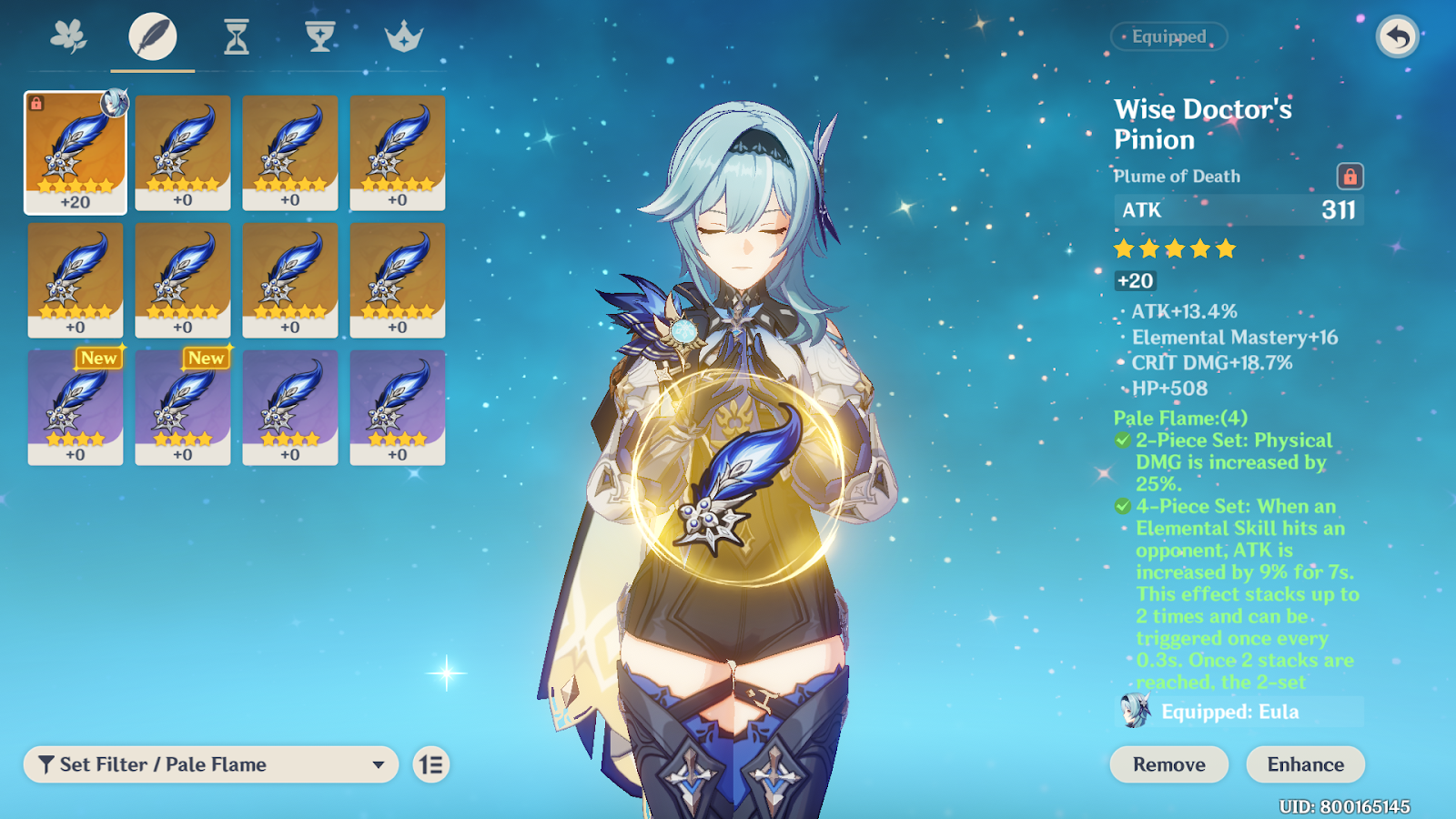 Eula is a powerful physical and burst damage character that can easily take the main role in DPS with the large amount of damage she can deal. Not to mention, her fast attack speed gives her the ability to deal far more damage in a shorter span of time than other claymore wielding characters. This recipe makes for a great character that can stand atop Genshin Impact’s other DPS characters. With all of that being said, we hope this guide helped you on your journey to building Eula! [poilib element=”accentDivider”] Cedric Pabriga is a freelance writer for IGN. He spends most of his day listening to music or playing video games. He also writes short stories in his spare time. You can follow him on Twitter @IchikaRika.

Injustice: Gods Among Us Explained