Today, Blizzard hosted a new Overwatch 2 livestream with a bunch of new details on the upcoming sequel.

While the biggest news was arguably changing PvP team compositions, there were plenty of other new details. Below are some of the biggest details we learned from today’s Overwatch 2 stream.

As reported earlier, Blizzard has announced that Overwatch 2 will introduce 5-member PvP teams, down from the 6-person teams introduced in the first Overwatch. Along with the smaller team sizes, tanks will be adjusted so that they are more like brawlers in a fight, rather than stationary shields. [ignvideo url=”https://www.ign.com/videos/2019/11/01/overwatch-2-gameplay-overview-trailer”] Furthermore, each class will receive a new passive ability to complement their abilities. Tanks will have knockback reduction and reduce ultimate charge gain when taking damage from enemies; Damage heroes will get a movement speed bonus, and Support will self-heal when they don’t take damage for an extended period of time.

Blizzard also revealed a new map during today’s stream called Monte Carlo. Based on the luxury vacation destination, the fictional version of Monte Carlo is very much like its real-life counterpart, where beautiful buildings are situated on steep hills. It is still very much a luxury destination but given the slight futuristic makeover of Overwatch.

Assault Will be Removed From Competitive Play

While Assault will still be available in Custom, it will be removed from Quick Play, which is being designed to be similar to Competitive.

Blizzard Is Working on More Push Maps Than Just Toronto

Push is an upcoming game mode where both teams will play a game of tug-of-war using a robot that will be pushed in the direction of whichever team is losing. Blizzard has revealed it is working on more Push maps other than the upcoming Toronto map.

During the live stream Blizzard revealed Rome will be a Push map.

Overwatch 2 – Blizzard Is Experimenting With New Modes Beyond Push, Too

As part of the discussion about removing the Assault game mode, Blizzard explained that it is constantly experimenting with new game modes, aside from Push. No word yet on what those maps could look like, but Blizzard is looking for ways to fill the void left by Assault while also giving players even more variety.

Keller hinted at least one more new game mode that he is excited to talk about soon.

Overwatch 2 – Not All Maps are Tied to Story Mode

Blizzard has already shown off new maps such as New York, Toronto, Rome, and Monte Carlo. But Blizzard says more maps are in the works aside from these initial four.

Blizzard also says these maps aren’t necessarily locations that will be present in the story mode and that some maps may be designed for their own sake.

As caught by Polygon, the New York map in Overwatch 2 has a fun tribute to former Overwatch director Jeff Kaplan. Eagle-eyed viewers will see that New York has a store called Jephs Corner Pizza. 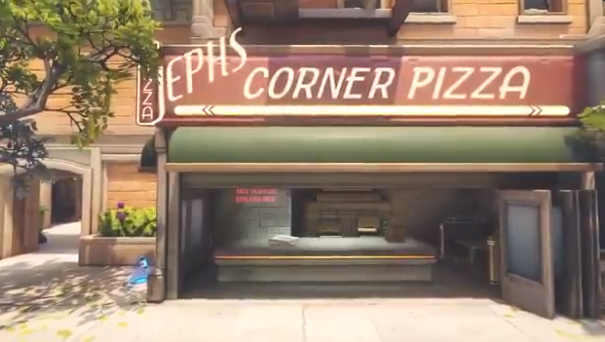 “Jeph” is a reference to a 2017 tweet about the new Starbucks that opened on Blizzard’s Irvine, California campus where the baristas mistakenly spelled Jeff Kaplan’s name as “Jeph.”

Starbucks opened on campus today. This made my morning. pic.twitter.com/lDDiVpaGBm

Injustice: Gods Among Us Explained